Petrotahlil --Asian petrochemicals markets are on a roll this week, with demand rising and exceeding supply, as China’s economy continues to improve post-holidays (1-8 October) after staging the fastest recovery from Covid-19 as compared to other major economies.

Reflecting a stronger Chinese economy, the central bank kept its benchmark lending rate stable for the sixth straight month; the one-year loan prime rate (LPR) and the five-year LPR remained at 3.85% and 4.65%, respectively.

China’s industrial outputs increased by 6.9% on year in September, faster from 5.6% in August, based on data from the National Bureau of Statistics (NBS).

The world’s second-largest economy is increasing spending, with more stimulus to support its growth.

There are plans to slash enterprises’ tax and fees burdens estimated to exceed yuan (CNY) 2,500bn - the highest in history.

With China on an upward trajectory economically and containing the deadly coronavirus successfully, the petrochemical markets in the region were lifted by strong Chinese demand.

Asian demand for acrylonitrile-butadiene-styrene (ABS) has been strong, especially with China sapping all supplies available while the US market continues to tighten as domestic demand improves and imports slip.

ABS is the largest volume engineering thermoplastic resin and is used in automobiles, electronics, appliances and recreational products.

Firm Asian butanediol (BDO) demand is expected to persist until the end of the year. At present, demand from the downstream sectors shows continued pick-up following the Chinese holidays. 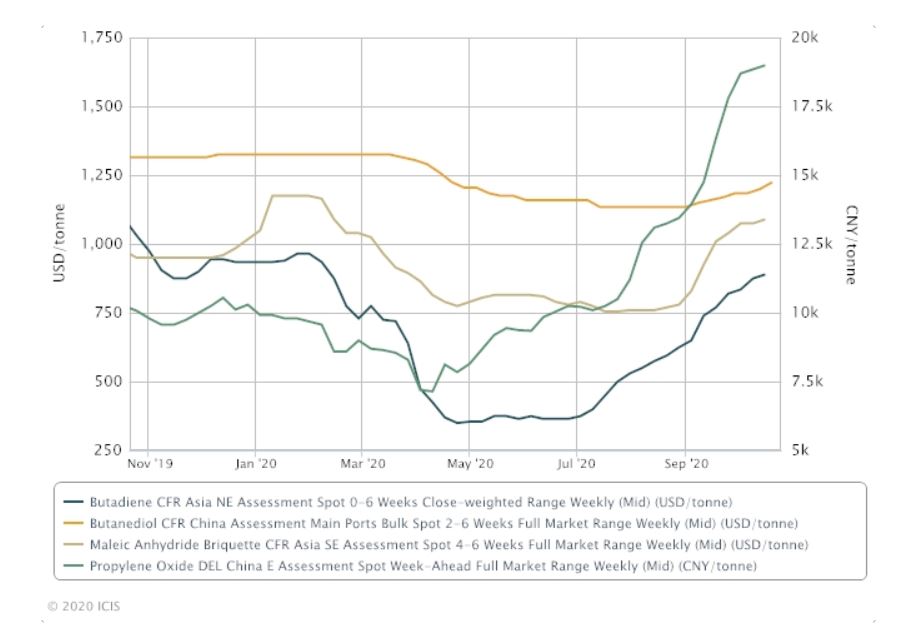 Supply of regional BDO - a chemical intermediate used in the production of polymers, solvents and fine chemicals - has tightened due to a plant undergoing turnaround and another facility was heard to have shut on an outage in the upstream unit in September.

Force majeure at US and European plants further added to the supply woes.

However, the recent uptrend in Asia MEG market is expected to be limited by easing supply, as well as concerns over textile demand from the export market, Rachel Qian, lead analyst at ICIS, opined.

"The recent surging in export order which transfer from India, is expected to be temporarily transition rather than structured. In addition, China MEG futures are also showing some weakened trend, reflecting the concerns from the market," Qian said. 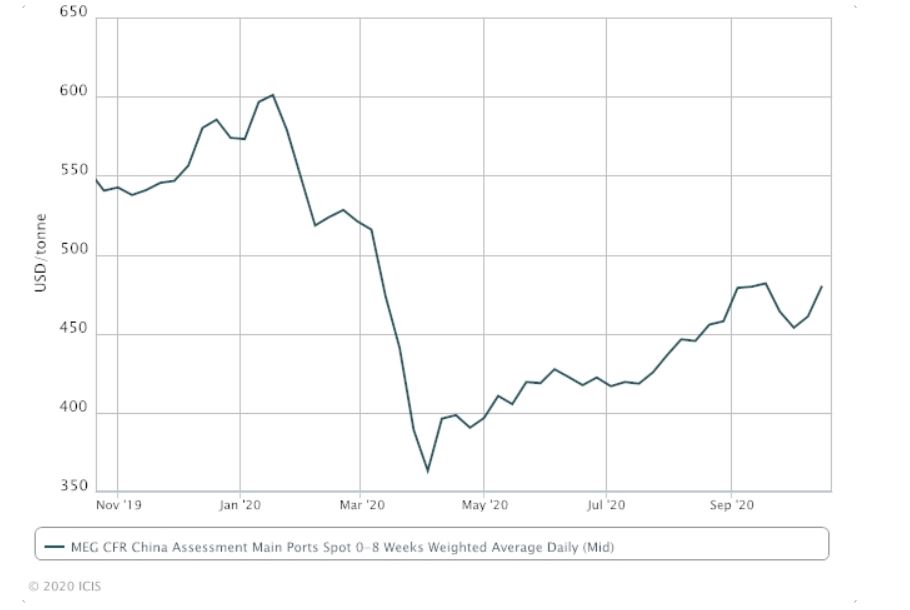 Meanwhile, China’s low density polyethylene (LDPE) market remained firm on the back of a supply shortage of imported cargoes from Iran and the US.

An Iranian supplier has shut its LDPE unit for maintenance, while fewer US cargoes were being imported into China as the US-Asia PE arbitrage economics were broadly unworkable, causing the arbitrage window to be nearly shut. 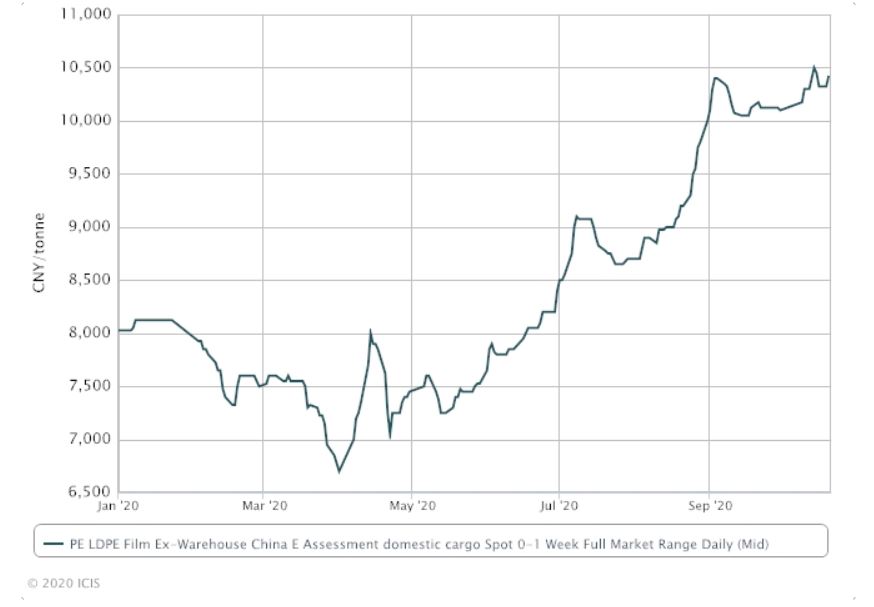 "The NR price movement is expected to be a key factor for the SBR market in the rest of 2020 and into 2021. Beyond speculation, strong fundamental is also providing the support to the prices," said ICIS senior analyst Ann Sun.

NR production has seen a decrease in 2020 due to a shortage of rubber tappers and more feedstock going into latex, as well as the rubber trees disease and the recent raining weather, Sun added.

"The NR market could see a boost in 2021 as its overcapacity comes to an end. The price-based substitution away from NR to SBR in Asia is expected to accelerate. In response, Asian SBR plants are expected to run at a high rate in Q4," Sun said. Buoyed by a strong Chinese market, Asian epoxy resins prices scaled up to a six-month high and the uptrend looks poised to hold amid a rosy near-term economic prognosis for China.

Asian epoxy resins cargoes are being sold at an average of $2,300/tonne FOB (free-on-board) northeast Asia in the week ended 20 October, and the last time such trades were above this level was in late March, ICIS data shows. 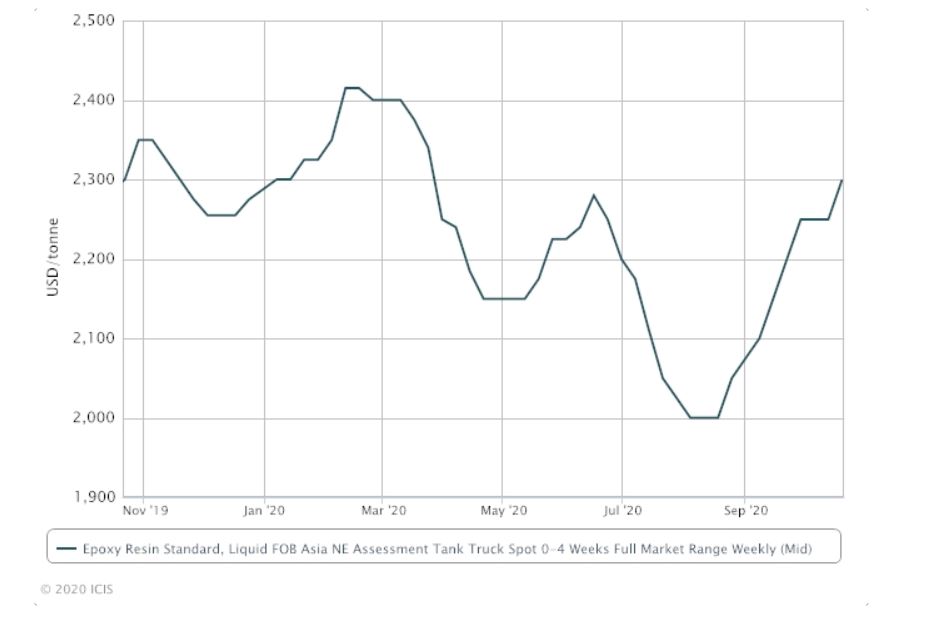 Sentiment for its feedstock epichlorohydrin (ECH) is buoyant in the Asian market, as spot supplies look set to stay tight in the next one to two months.

This is expected to keep offers supported, alongside stiffening cost pressures.

Asia's polybutylene terephthalate (PBT) resins market staged a significant rebound in the week to 20 October after months of lacklustre performance.

Offers from domestic suppliers rose in response to the rapid increase in feedstock butanediol (BDO) values.

Local PBT prices in China increased to around CNY8,300/tonne in October, from below CNY7,000/tonne in the third quarter.

PBT, an engineering plastic, is a thermoplastic polyester resin used in the automotive industry for mirror housings, fans, fuse boxes, cowl vents, and motor and ignition system components. It also has uses in electrical and electronic products. 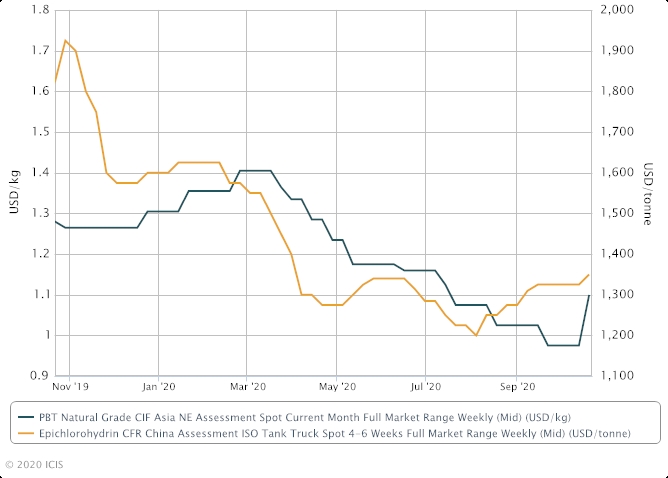