Petrotahlil - CHINA’S HDPE demand fell by around 6% in 2021 over the previous year, according to my estimate. This would be the first negative growth in consumption since 2000.

The 6% decline, in line with my earlier estimate, is based on the full China Customs import and export data for 2021, ICIS estimates for local production and my discussions with the market.

In contrast, PP demand growth was positive last year. I believe that HJDPE performed worse than PP because HDPE is a more a “local for local market” – i.e. it receives less support from exports of finished goods.

China’s exports continued to boom in 2021, with a big pick-up in trade in the second half of the year, following a slightly weaker first half in volume terms on all the supply chain problems. In value or US dollar terms, trade was up throughout the year because of inflation.

Some 25% of PP is thought to be exported to China for re-export as components or packaging for finished goods, whereas the percentage for HDPE is said to be roughly 15%.

But like PP, local HDPE demand was dented by the Common Prosperity policy pivot that is here to stay, as the old investment-based economic growth model no longer works.

Here is an important reminder of the three major objectives of Common Prosperity:

In the short term, expect volatility in demand growth as policies are fine-tuned. Temporary measures may also to be introduced to boost the economy.

But, on balance, while I see 2022 growth returning to positive territory, I believe that the percentage level of growth will be below the long-term average because of Common Prosperity.

The accepted wisdom is that China won’t relax its zero COVID policy until at least after this year’s National Congress of the Communist Party of China, which will take pace in either October or November, when China’s president, Xi Jinping, is expected to be confirmed for a third term. 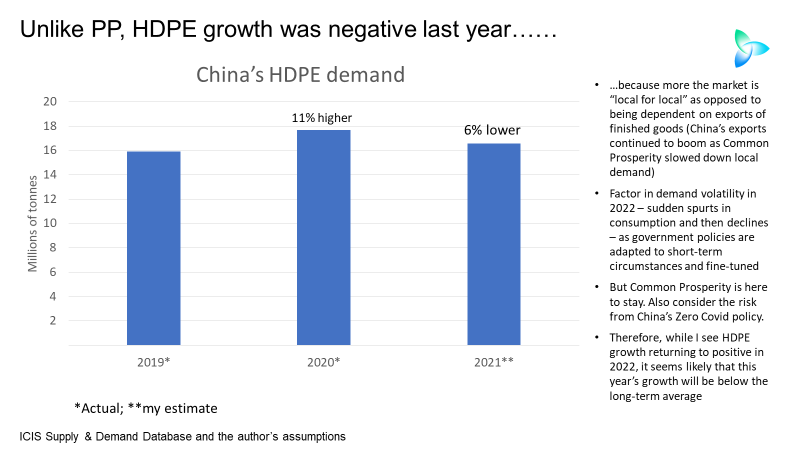 A statistical quirk means that in percentage terms, China’s year-on-year HDPE imports declined by the same percentage amount in 2021 as PP. Last year’s HDPE imports were also down by about 17% over 2019, reflecting a longer-term shift to greater self-sufficiency. Here is the data in millions of tonnes. 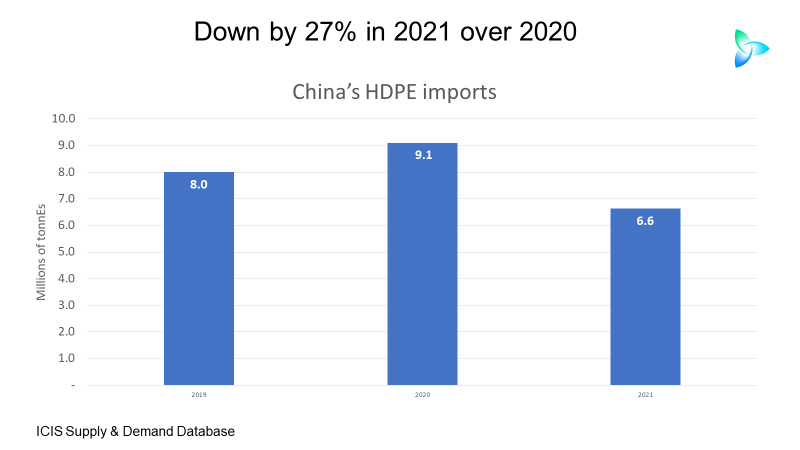 The chart below shows the impact of the 2021 capacity increases and negative demand growth on the top 10 sources of China’s HDPE imports. 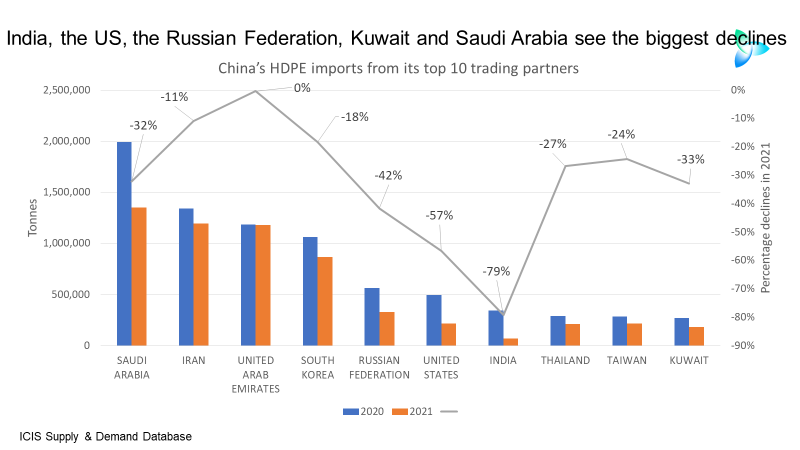 As you can see, India, the US, the Russian Federation, Kuwait and Saudi Arabia saw the biggest declines out of China’s top 10 trading partners. Only the United Arab Emirates (UAE) didn’t lose any ground in 2021 over 2020.

But, as with PP, this doesn’t provide the complete picture. Also consider the table below. 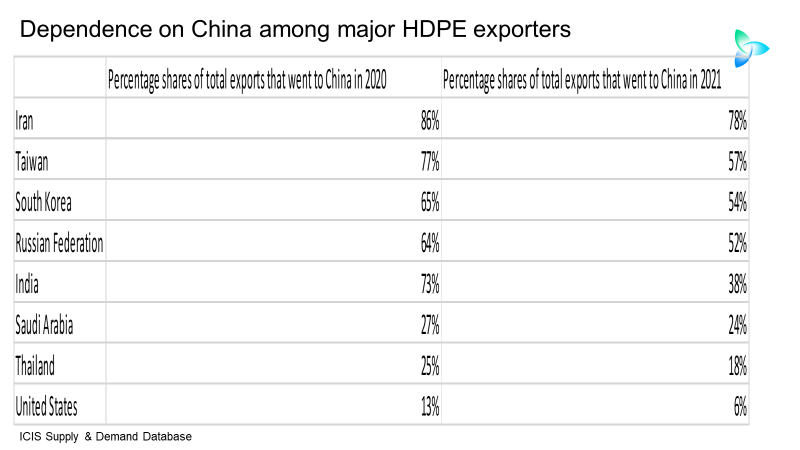 We don’t have the complete 2021 export data for all the exporters listed above – and we don’t have any data for the UAE and Vietnam.

Also consider that India’s total exports in 2021, based on the January-November data, look likely to have declined by around 52% to 196,000 tonnes on healthy local demand.

US exports, again based on the January-November 2021 numbers, look set to have been 26% lower at 1.9m tonnes on a big drop in production because of the Texas winter storm and hurricanes. US production is showing signs of returning to normal.

The lack of complete data sets for 2021 and lower Indian and US exports somewhat reduce the usefulness of the numbers in the above chart.

BUT note that despite Iran, Taiwan, South Korea, the Russian Federation, Saudi Arabia and Thailand diversifying their risks away from China in 2021, they all remained heavily exposed.

This matters because China accounted for some 60% of HDPE global net imports (imports minus exports) in 2021 – way ahead of any other region.

Also look again at the three scenarios I presented in this earlier post for China’s HDPE net imports in 2022, based on different demand growth and operating rate outcomes – either 7.3m tonnes, 5.7m tonnes or 4.4m tonnes.

New HDPE plants are also due to come onstream in 2022 in India and the Philippines.

It thus remains essential that HDPE producers and buyers stay on top of this constantly evolving market. For the producers, it about mitigating risks and for the buyers, maximising the opportunities.

The final chart today reviews China’s HDPE exports in 2021 with, again, an outlook for this year. 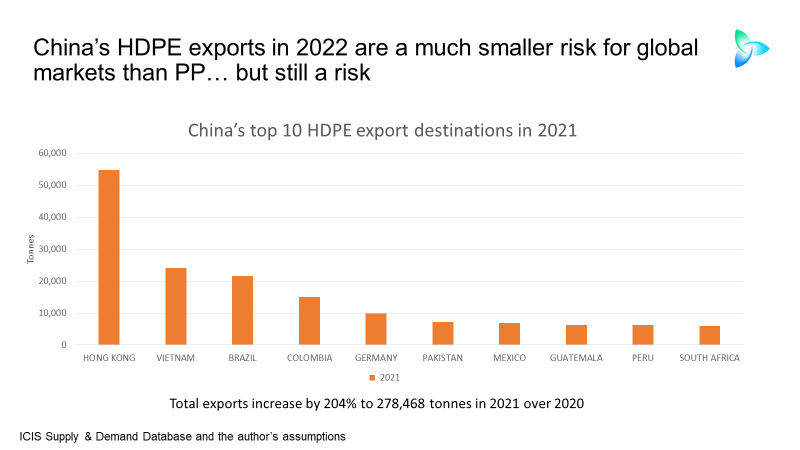 Unlike in PP, there is no danger of China shifting into a net HDPE export position in 2022. It is also important to note that the biggest increase in last year’s imports were in March-April when container freight space was easier to obtain.

But still, in each month last year over the same month in 2020, exports were sharply higher.