A range of European fertilizer production has been taken offline amid record high Dutch TTF and British NBP gas prices, although the British government stepped in with short-term financial support which led to the resumption of one of CF Industries’ two UK fertiizer plants. 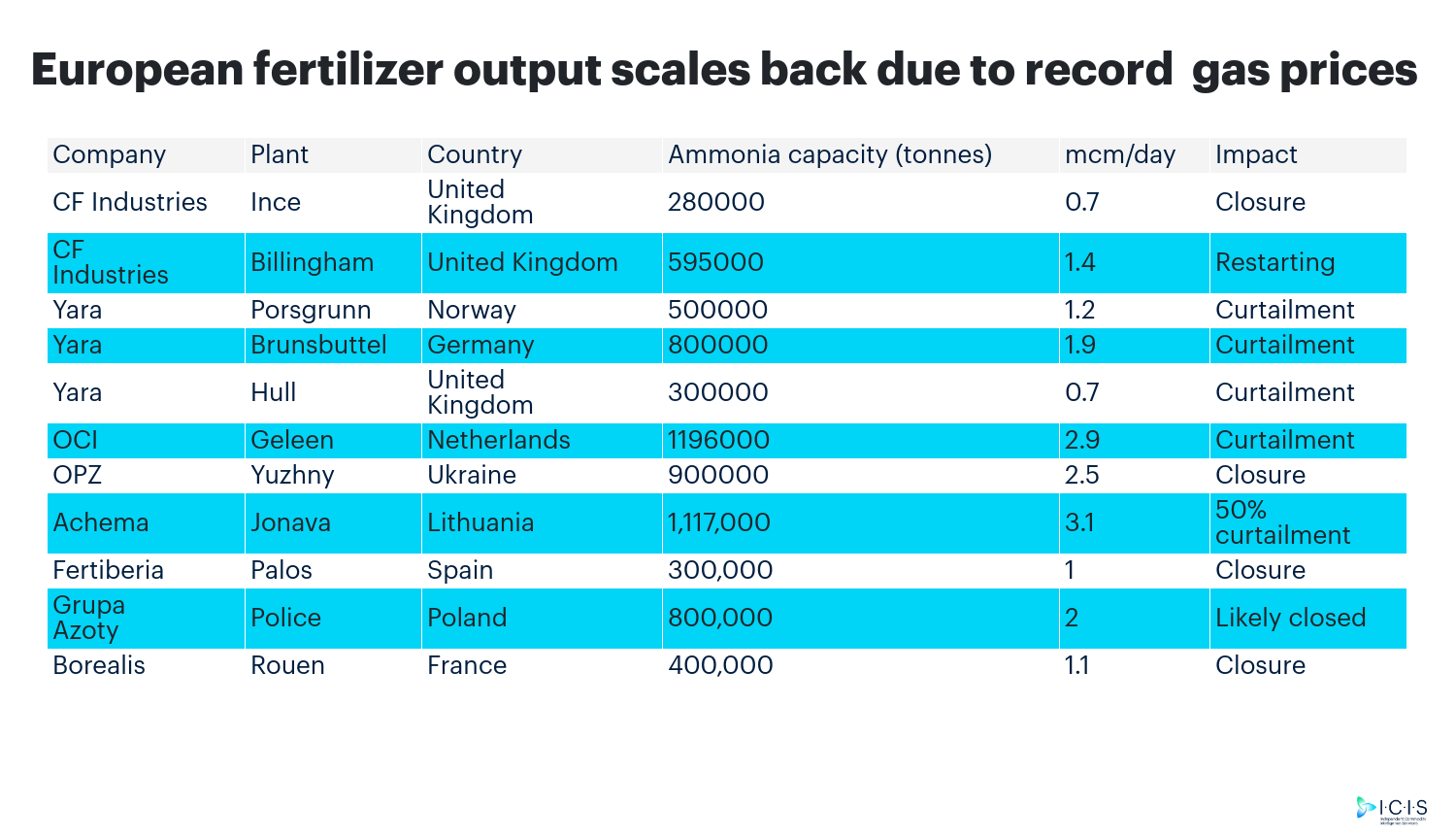 This followed a lack of UK carbon dioxide production, a by-product of ammonia production which is critical for a range of products and services, such as the UK food industry.

The British NBP front month on Monday, 20 September hit a record high of $25.5/MMBtu, with the corresponding TTF market closing at $25.4/MMBtu, a similar record, and with the ICIS TTF benchmark up from $17.2/MMBtu at the start of the month.

European spot prices then edged down but concerns over upcoming winter fundamentals mean that substantial downside is unlikely.

High gas and electricity prices have become a major global issue, with governments stepping in from Brazil to China to try to mitigate concerns over supply and the impact on downstream industries ahead of the peak winter demand period in the northern hemisphere.

British gas demand from the industrial sector has dropped with some companies reducing off-take due to high NBP prices, although low renewable generation is having a larger impact on the wholesale market.

On 15 September, CF Industries announced that it would halt fertilizer production at two UK facilities due to the high cost of gas.

A day after the announcement, gas demand in Britain from the industrial sector dropped to just over 4 million cubic metres (mcm), down from 6mcm the day before.

Gas off-take from industrial users was already below average with consumption of about 5.77mcm/day during the month to date, compared with 10mcm/day over the same period between 2016-2020.

Demand from the sector only represents around 5% of the UK total, meaning even if other off-takers cut nominations, the impact on the NBP is likely to be limited.

Overall gas use during September is actually above average for the month despite the lower industrial usage, as power sector off-take has increased to compensate for low wind generation.

Strength in gas prices has led to more UK coal-fired capacity coming back into the mix with these plants accounting for about 2.5% of the UK generation stack this month, compared to less than 1% during September 2020.

Gas demand for electricity production has still been higher than normal, as low wind output has played a much greater role than the return of coal.

In September to date, off-take from UK gas plants has averaged just under 60mcm/day, compared to 46mcm/day on average over the period between 2016-2020.

Over the same days, wind farms have produced about 2.4GW on average, accounting for less than 9% of the generation stack, down from more than 21% during September last year.

Days of particularly low wind output have corresponded with surging gas demand from the power sector, for instance on 15 September when wind farms produced just 1.7GW while off-take from gas plants was up to 70mcm.

Both British NBP front month and day-ahead have progressively climbed over the course of the summer as LNG cargoes have continually delivered into the Asian Pacific over Europe amid high Norwegian pipe gas maintenance, resulting in below-average European storage levels ahead of the winter.

CF Industries’ 595,000 tonne/year Billingham ammonia site was in the process of restarting in the middle of the week.

Reports suggested the government deal with CF Industries may have been drafted to exclude other companies which have shut production due to higher gas costs from seeking similar national subsidies.

CF Industries appeared to have bought 15,000 tonnes of ammonia from Algeria due to arrive at Tees this weekend. Yara has a site located at Immingham, in Hull, with capacity of 300,000 tonnes/year, which also closed on the back of rising energy costs.

Elsewhere in Europe, ammonia production has been stopped due to high costs for raw materials.