• US LNG exports to reach pre-coronavirus levels by November

Petrotahlil - Rallying European and Asian natural gas prices have widened premiums to the US Henry Hub since the beginning of September, paving the way for US LNG exports to those regions to return to pre-pandemic levels this quarter.

US LNG exports are forecast to return to pre-coronavirus levels by November, according to the latest energy outlook from the US Energy Information Administration (EIA) released on Wednesday.

On the same day the Dutch TTF gas month+2 hit a year-to-date high of $4.865/MMBtu, ICIS assessments show. This resulted in a $1.769/MMBtu premium to the US Henry Hub equivalent, a seven-session high.

On the same day the East Asia Index (EAX) month+2 also reached a year-to-date high of $5.55/MMBtu. The contract’s premium to the Henry Hub was $2.454/MMBtu, also a seven-session high.

US LNG sellers will be encouraged by the rising premiums amid renewed bullish momentum in the European and Asian markets for weeks 36-41. A strong pick-up in North American supply into both markets is likely to follow.

North American production is expected to reach 5.3m metric tonnes in November, its highest monthly total since the coronavirus outbreak in the first quarter according to the LNG Edge supply forecast. That would be the second-highest monthly volume this year behind only December’s forecast of 5.7m tonnes.

Improving global spreads and the US production recovery has already been reflected in rising exports to Europe and Asia. 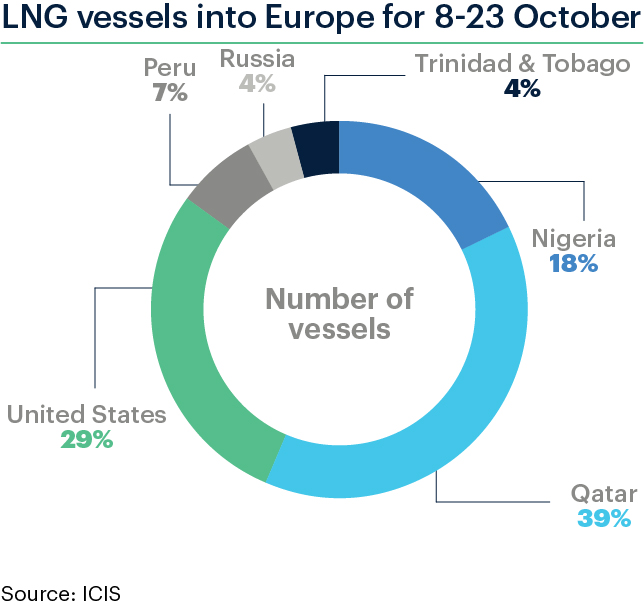 However a level of fundamental uncertainty has arisen in recent sessions with Hurricane Delta converging on the US Gulf Coast. Market sources said they expected plants to soon start shutting down as a result.

Broad support for global forward prices has come from expectations of natural gas demand recovery and potential LNG supply restrictions amid maintenance at the Gorgon LNG plant in Australia, according to the recent EIA outlook.

On Wednesday bullish carbon values dragged the wider energy complex and the TTF gas curve up during the session after the European Parliament backed the proposal of raising the 2030 emission reduction target to 60%.

While interpreted as a bullish development by the emissions market there is no fundamental impact in the medium- to long-term, as no target has been agreed yet, according to ICIS analysts. The ICE EUA benchmark jumped by more than €1.00/tCO2e during the morning session as the news filtered through but trended lower as the day wore on. The contract shed further value on Thursday.

Price support has also been derived from ongoing industrial action in Norway which continues to suppress gas pipeline flows into Europe. Norwegian labour union Lederne began its strike over the weekend following a pay dispute with Norwegian Oil and Gas.

Fields delivering into SEGAL, as well as the Kvitebjorn and Sleipner gas fields, have suffered unplanned outages as a result with daily capacity cuts of 30-40mcm/day for most of the week. There are plans to escalate the strike with another four gas fields vulnerable to supply disruption from 10 October.

Meanwhile the Asian market has found regional support on the prospect of a rise in Chinese demand this winter, while following some of the bullish momentum in Europe. Chinese LNG demand has been rising due to growing domestic gas consumption and a reduction in costlier pipeline gas imports.