In the PE sector, July contracts for LDPE grades broadly settled at a margin pass-though, or at least a €84/tonne increase. Lower production rates and the lack of imports supported suppliers’ hike requests. However, LLDPE and HDPE grades saw margin erosion with contracts settling at no more than a €70/tonne increase.

For early August, most L/LDPE and HDPE grades settled on a rollover despite producers’ calls for price increases of up to €40/tonne. Only HDPE blow moulding posted price increases.

In July, PP copolymer injection prices increased in line with the €75/tonne rise in propylene costs with homopolymer products showing small margin erosion. However, August PP contracts are increasing across the board in excess of the €27.5/tonne rise in propylene costs mainly as a result of lower availability following several plant stoppages in France.

PVC prices have increased by slightly more than the pro-rata additional ethylene costs over the last two months due to restricted supply and a pickup in demand.

PS producers experienced further margin erosion during July and August with contracts settling less than the rise in styrene monomer costs. PS is well supplied and demand is low.

European standard thermoplastic markets were adequately supplied over the peak summer months although there were significant differences between individual producers’ ability to supply. A few bottlenecks were evident in the PE and PVC sectors as a result of production outages. Otherwise, polymer plants in most other product sectors were running without interruption, although producers maintained strict output controls to avoid excess stocks developing ahead of the holiday season.

Few additional unplanned plant outages were called during the last two months. However, in early August Total declared force majeure on its 115,000 tonnes/year PP line at Lavera, France due to technical issues. Total also had to shut down its 150,000 tonnes/year PP line in Lavera due to a power outage caused by the persistent forest fires near Marseille. Other companies producing at the French petrochemical site include Kem One and Ineos.

A number of polymer plants will be shut down for planned maintenance work during the autumn. Producers have been building buffer stocks ahead of the planned shutdowns.

In July, polymer demand was generally quite mixed. The easing of the lockdown led to some stimulus, especially in Southern Europe, but in view of the high prices and earlier restocking, converters bought only what they needed for immediate production. Packaging industry demand was mixed with good demand from the hygiene products sector and weak demand for beverage products. The construction industry was much more buoyant in July, which lifted PVC sales. Automotive industry sales remained subdued.

In August, many converters are shutting their lines for 2-3 weeks for summer holidays. The high prices and the holiday season are expected to further dampen demand. 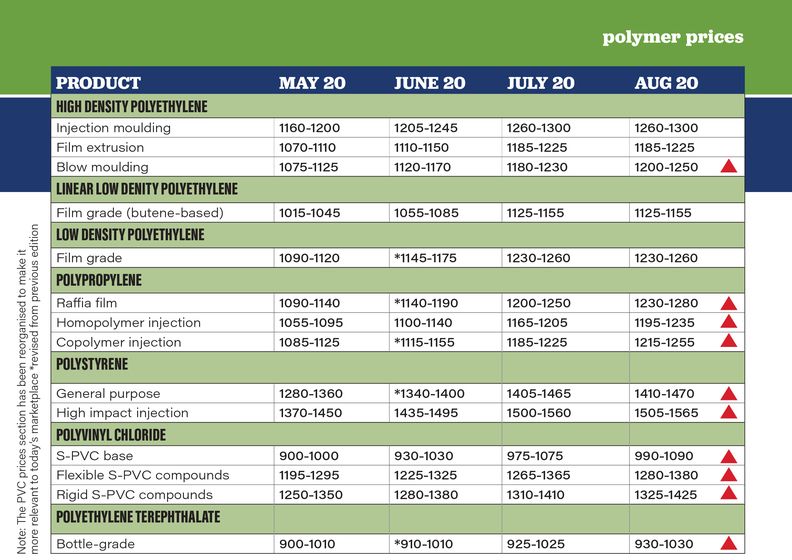 Polymer prices are expected to record a stable to slightly rising trend during September on the back of firm upstream costs and higher demand.

In July, L/LDPE prices continued to rise after the ethylene contract price registered a substantial increase for the second month running following previous hefty declines. L/LDPE producers initially targeted a price hike at least equivalent to the €84/tonne rise in the July ethylene reference price. LDPE prices increases matched the increase in the cost base while LLDPE prices gained around €70/tonne.

For LDPE grades, lower material availability and a lack of imports supported suppliers’ hike requests. LLDPE supply was longer with a continued inflow of imported material from the Middle East. Demand was fairly mixed with many processors buying only what they really needed. Most processors were also well stocked.

August contracts initially settled on price rollovers despite the €21/tonne rise in the ethylene contract price and producer calls for increases of up to €40/tonne.

In July, the ethylene contract price settled with an increase of €84/tonne, the second significant price increase for ethylene after recent sharp falls. However, this did not drive up HDPE prices to the same extent as with L/LDPE grades due to the longer market and the lack of buying interest from converters. Blown film grades saw price gains of €70/tonne, with blow moulding prices up €65/tonne and injection moulding prices rising by €55/tonne.

Material availability was more than adequate and there were few production bottlenecks. Demand was fairly muted as converters were well stocked and bought only what they really needed for current production.

Initial blow moulding contracts settled €20/tonne higher in August with rollovers for other product, despite the €21/tonne rise in ethylene. Blow moulding tightened due to production restrictions and lack of imports.

In July, the propylene feedstock continued its uptrend trend, rising €75/tonne. PP sellers initially targeted a price increase equal to the feedstock cost but were forced to step back from their initial hike request as a result of mixed demand and adequate supply. Copolymer injection grades registered the strongest gain, up €70/tonne, with homopolymer injection up €65/tonne and homopolymer film grades up €60/tonne.

Demand registered a slight uptick for certain industries following an easing of the lockdown restrictions, but automotive remained subdued. Packaging suppliers tended to be well stocked and baulked at the higher prices being asked.

In August, PP producers called for price hikes of €40/tonne and contracts settled slightly higher than the €27.5/tonne rise in the propylene contract price on tightening availability. Buying activity was expected to pick up later in the month.

The styrene reference cost continued trending upward in July following protracted negotiations, eventually settling €86/tonne higher compared to the previous month. Polystyrene producers initially planned to raise notations at least in line with the feedstock cost rise. However, weak demand forced producers to push back on this price target and much smaller gains of around €65/tonne were achieved.

PS is well supplied and producers were able to meet the slack demand ahead of the holiday season. Producers also built up stocks ahead of the upcoming plant maintenance season. Converters’ stocks were adequate and high prices deterred any additional buying requests.

PS producers targeted a price rise of €20/tonne in August following the €4/tonne increase in styrene monomer costs. Converters fought for a rollover but were unable to prevent deals from settling with a small price rise.

PVC output was impacted by production issues at several plants, but overall producers were able to meet agreed contract volumes. Demand improved following an easing in the lockdown restrictions across the continent.

After the August ethylene contract settled €21/tonne higher, some European PVC producers initially targeted price increases of up to €25/tonne, pointing to healthy demand across various sectors and tightening supply for going beyond 50% of the ethylene hike. By mid-month, most contracts were settling with an increase of €15/tonne or slightly beyond.

In July, European PET producers announced planned price increases ranging between €20-40/tonne reflecting a rise of €25/tonne in their cost base and a need to improve profit margin. However, weak demand as a result of the coronavirus pandemic constrained produces’ plans to raise contract prices beyond the cost rise. Freely-negotiated PET contract prices mostly settled around €15/tonne higher compared to June.

While hygiene container demand was strong, beverage bottle sales remained weak. PET demand was however supported by customers’ ongoing need for security, prompting them to give preference to European goods, import offers were rarely taken up. Production lines in Europe continued to run at good operating rates in most cases.