Petrotahlil --China’s monoethylene glycol (MEG) demand is largely steady amid ample supply, which is likely to get worse with new capacities coming on stream in the second half of the year.

The overall domestic market is weak as support from recent crude gains was being overshadowed by bearish supply-demand fundamentals. 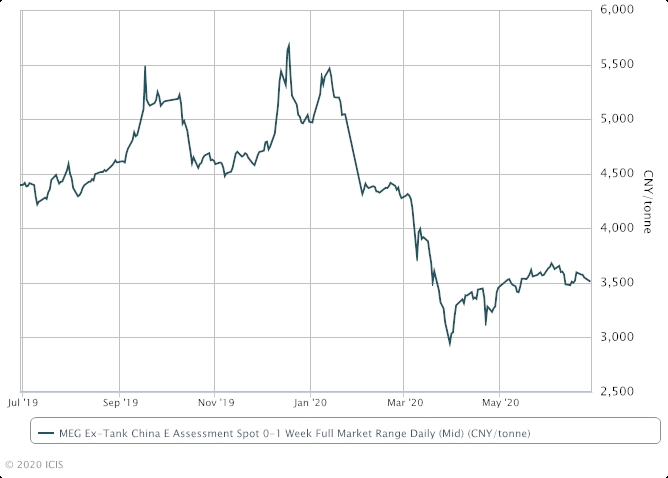 Downstream polyester plants have maintained an average run rate of above 85% so far in June, with inventories piling up in the face of weak end-user demand despite producers’ price cuts to boost sales.

Recent gains in upstream crude markets were fueled by expectations that demand will pick up in line with easing of lockdowns worldwide.

The MEG market typically takes the cue from oil price movement, but it is facing heavy supply-side pressure with plants restarting from turnarounds while coal-based facilities have nudged up production.

BASF-YPC restarted its MEG unit in late June, while Tianjin Petrochemical and Sinopec SABIC (Tianjin) Petrochemical plan to restart their units in early July. These plants are naphtha-based facilities.

Supply will also be further augmented as new capacities are due to come on stream in the second half, including those from Xinjiang Tianye, Sinopec’s Zhongke project in Guangdong, Sinochem Quanzhou and Wanhua Chemical. The plants due to start up in July-October have a combined annual capacity of 1.53m tonnes.

Some port operators have raised initial storage charges and warehouse overdue fees in a bid to accelerate lifting of cargoes.

Naphtha-based MEG producers are either cutting plant operating rates or converting their product in ethylene oxide (EO), in response to cost-side pressure caused by spiking naphtha and ethylene prices.