Petrotahlil - Asia’s polyester market came to a standstill since early August as any further price upside was curtailed by the sluggish sales, while the overall demand is expected to pick up in September amid the traditional peak season.

The price rise seen since early July halted in August as buying enquiries from overseas markets were very limited amid the global economic downturn. Many downstream converters only purchased small quantities to cover their basic requirements.

In the meantime, major exporters were reluctant to reduce prices given the eroded margins.

Prices of Asian monoethylene glycol (MEG), one of the feedstock materials, increased by close to 4% in August, which squeezed polyester margins.

“We are waiting and seeing now. We cannot reduce prices further as our margins now fell into breakeven level,” a major southeast Asia producer said.

“But weak sales also prevented us from raising prices. So we are facing a dilemma now,” the producer added.

Many market participants are now in anticipation of the upcoming typical peak demand season of September and October.

“More restocking activities are to be expected in next month as buyers will replenish cargoes to producer winter clothes,” a major Chinese exporter said.

However, the polyester demand growth in 2020 is expected to be lower than the previous year due to coronavirus pandemic, sources said. 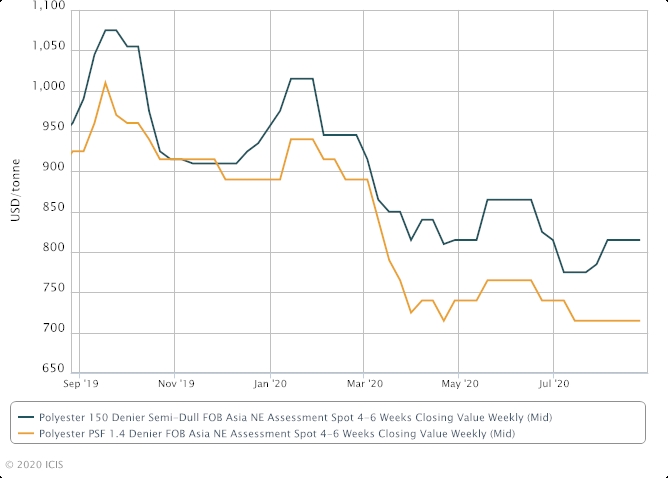