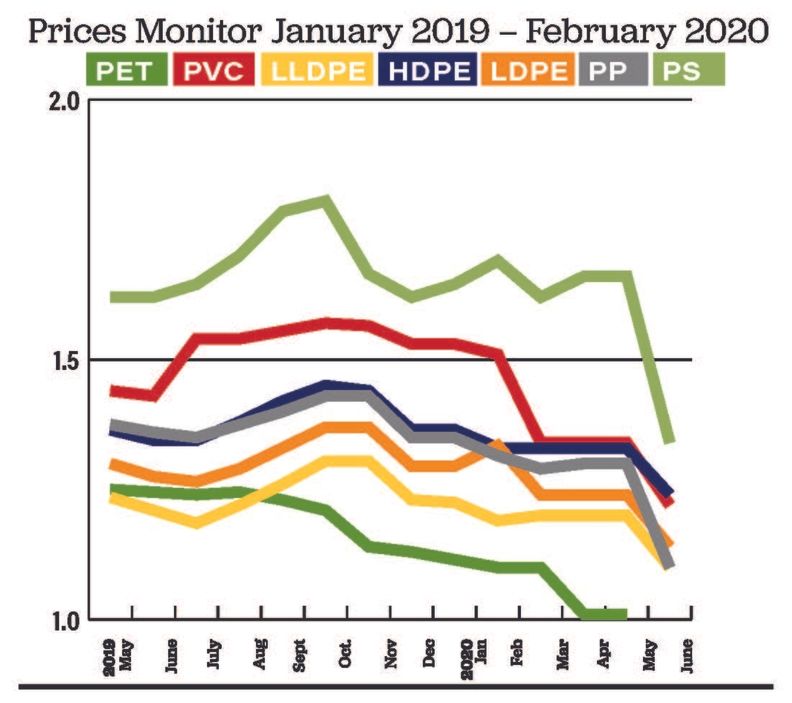 European standard thermoplastic prices plummeted to multi-year lows in May as a result of lower upstream costs and weak demand. Polymer prices turned a corner in June following a rise in crude oil and feedstock costs.

In May, L/LDPE producers limited price reductions to less than half of the €100/tonne fall in ethylene costs, with HDPE prices falling by slightly more. By mid-June, however, both L/LDPE and HDPE producers had passed on €40-50/tonne of the €60/tonne rise in the June ethylene contract price.

PP producers had to pass on most of the €80/tonne reduction in the propylene May contract price to buyers. By mid-June, PP buyers resisted paying the full monomer hike of €60/tonne with settlements ranging from €40-50/tonne.

PS prices stabilised in May and had increased by slightly less than the €64/tonne rise in styrene monomer costs by mid-June. PVC producers passed on in full the €50/tonne impact on their cost base of the €100/tonne reduction in ethylene costs in May.

By mid-June, PVC prices had increased by €30/tonne compared with a €60/tonne rise in ethylene costs. May PET deals were closed with decreases of €30/tonne, which was slightly more than the proportionate impact of a lower cost base before stabilising by mid-June.

Demand started to pick up in May as several European countries eased the lockdown restrictions, but varied widely between sectors. Food and hygiene packaging markets continued to perform well, but polymer demand remained well below normal for industrial, construction and automotive markets. Many large-scale converters took advantage of the low prices on offer to top up inventories. With many large-scale converters sitting on comfortable stocks due to their earlier pre-buying activities, demand was below normal up to mid-June.

Nevertheless, there appears to have been an upturn in consumer spending on non-essential items such as houseware products and an increase in construction activity. The automotive industry, meanwhile, remained subdued.

Standard thermoplastic prices may sustain firming in July driven by the rising upstream markets. OPEC and its allies extended oil cuts, which have pushed crude oil prices above the $40/barrel mark. Demand can reasonably be expected to grow later in the month and into July in anticipation of further price increases. Meanwhile, production controls remain to control polymer supply. 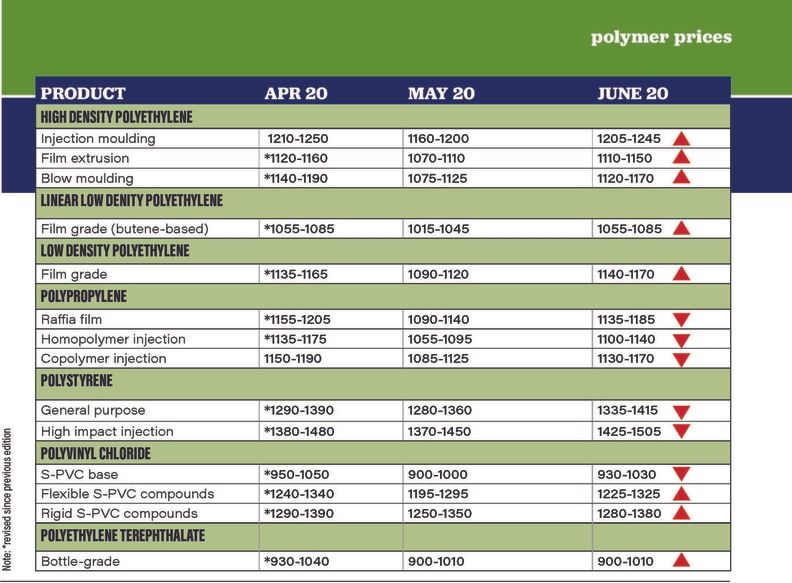 In May, L/LDPE producers restricted price reductions to around half of the €100/tonne fall in the ethylene contract price. LDPE prices fell by €45/tonne while LLDPE prices were just €40/tonne lower due to a more limited supply of imported material. Producers’ efforts to control production had an impact, while a number of unscheduled plant outages also restrained supply. Demand varied widely between end use sectors; film products for protective packaging were slightly below normal, while food and hygiene packaging film demand was mostly stable. L/LDPE prices took an upward turn in June following an increase of €60/tonne for the ethylene contract price. Producers did not however manage to factor in the full cost rise mainly as a result of weak demand. Pre-buying in May meant that converters’ stock levels were more than adequate to meet demand.

In May, certain HDPE products faced stronger downward pressure compared to L/LDPE due to comfortable supplies and weaker demand from automotive and construction sectors. Injection moulding grades saw price reductions of around €65/tonne while blown film and injection moulding product prices fell by €50/tonne over the previous month. Availability of imported material was plentiful, and made up for the reduced output from local producers. Demand started to return to more normal levels for the season, but varied widely between sectors. In June, HDPE prices ended their slide and started to turn upward again. While some producers called for triple-digit price hikes, prices increased by less than the €60/tonne rise in ethylene costs. Blow moulding and injection moulding products gained slightly more than blown film grades. Demand was below normal as converters had rebuilt stocks in May.

In May, PP producers reluctantly passed on most of the €80/tonne reduction in the propylene contract price to buyers as a result of excess supply. Homopolymer injection grade prices fell in line with the C3 cost reduction, while homopolymer film and copolymer injection grades registered price rebates of around €65/tonne. Demand varied with good order intake from the packaging sector, but automotive demand continued weak, being still under the impact of the Covid-19 crisis. Supply was plentiful, despite production cuts and maintenance turnarounds restraining output. By mid-June, PP buyers resisted paying the full monomer hike of €60/tonne with settlements ranging from €40-50/tonne. Material availability improved as a result of fewer plant maintenance interruptions. Demand was subdued with converters prepared to sit on abundant stock levels which they had built up when prices were low in May.

The styrene monomer (SM) reference price fell by just €13/tonne in May following a crash of €440/tonne during the previous two months. There were major PS price reductions in April and discounts varied widely. As such, many price corrections took place in May with settlements above the change in monomer prices, especially at the top of the price range. PS supply remained on the high side, despite production cutbacks. Packaging materials continued to perform well, but most other sectors were still adversely affected by the coronavirus crisis. PS prices took an upturn in June after three months of steep decline. PS producers however were unable to raise prices in line with the €64/tonne increase in SM costs, and settled for gains of €55/tonne. Packaging demand remained lively, but overall demand disappointed with converters’ stock levels adequate.

In May, PVC sellers reluctantly passed on in full the proportionate impact of the €100/tonne reduction in the ethylene contract price. PVC base material was down €50/tonne with PVC compound prices down less by €40-45/tonne as some additive costs fell by less than ethylene. The material surpluses in April almost disappeared as a result of production cutbacks. Demand gradually picked up in countries where the coronavirus-related restrictions were eased, but was still below the normal level. June saw PVC prices rising again with producers passing on the proportionate impact (€30/tonne) on their cost base of the €60/tonne rise in ethylene costs. Some producers however, called for a €40/tonne price increase. PVC production levels continued to be kept under control. Demand was more subdued as a result of converters pre-buying material at low prices in May.

In May, PET prices fell to their lowest levels for over a decade and the price range was wider than normal. May PET deals were closed with price reductions of €30/tonne, which was slightly more than the reduction in feedstock costs. Monoethylene glycol costs fell €67/tonne with paraxylene costs unchanged. Hence, the cost base was down €22/tonne. Demand was below expectations for May, sales to the food and hygiene sectors were good, but beverage sector sales were disappointing. Pre-buying was evident as many converters opted to secure extra stocks to capitalise on multi-year low prices. European PET prices bottomed out in June with support from rising oil and feedstock prices. PET continues to be well supplied from local producers and from Far Eastern imports. Demand will depend crucially on future development of the pandemic and the summer weather.