That said, fluctuations in upstream Brent crude futures which are facing headwinds from a resurgence of coronavirus infections in some countries, a supply overhang and concerns about a recovery in fuel demand, continue to restrict any upswing in naphtha values and keeping them largely range bound. 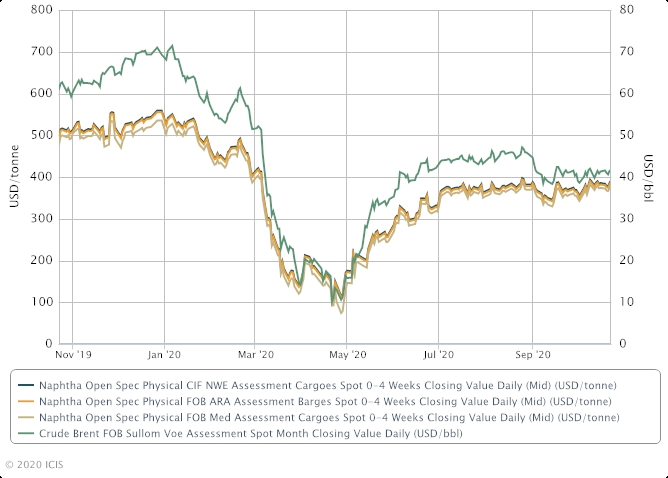 Despite the same, naphtha still commands a premium of around $30-$35/tonne on November flat values which were indicated in the range of $350-360/tonne, sources pointed out.

Feedstock economics continue to support naphtha which has gained a price advantage over propane, with the narrowing spread pushing demand from coastal crackers. The poropane-naphtha crack for October was at $8/tonne and for November at $1.5/tonne.

At the same time, the latest data on the stock levels in the ARA (Amsterdam-Rotterdam-Antwerp) hub saw a 14% drop in naphtha inventories while gasoline recorded an increase of 2% for the week ending 22 October, according to PJK International. 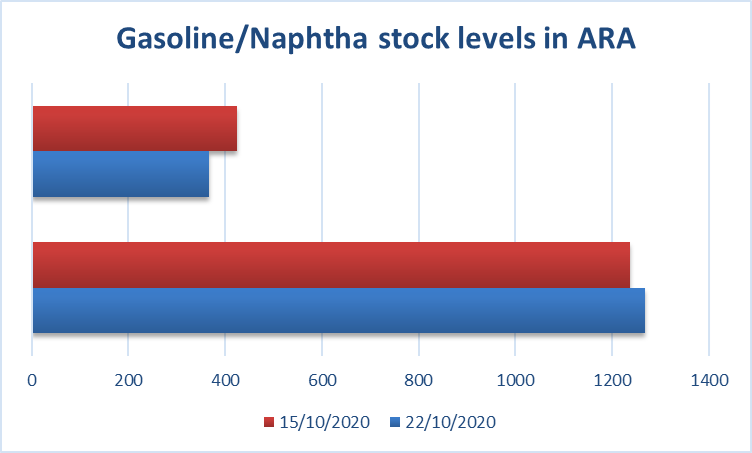 Limited requirement from gasoline blenders, however, continues to impart bearishness into the market. Market opinions vary because some players said there was no naphtha to meet blending requirements while others said it was gasoline length that was discouraging demand.

Speaking of gasoline length, one major trader said that there were few cargoes on offer, and at the same time, there were few buyers - which has kept the market structure unclear.

That said, all eyes are on potential demand from west Africa. This is because Nigeria is seen as unstable which could lend some support to gasoline outflows supporting the front-month crack spread, which has been static at $1.6/bbl throughout most of the week.

The softening crack was largely attributed to an unexpected rise in the US stock levels, which were up 1.9m bbl in the week to October 16, and restricting outflows to the US.

Meanwhile, the Asian market is showing signs of fragility and increased outflows concluded earlier in October, possibly close to 2m tonnes, and for November deliveries has kept Eastern arbitrage discouraging. That said, these volumes are elevated from estimated volumes averaging at around 1.5m-1.6m tonnes this month.