Shipments have been hit hard by the US-China trade war that started in mid-July 2018, and further deteriorated with the onset of the coronavirus pandemic this year.

The fall in September 2020 petrochemical shipments was steeper than the 16.4% decline in the previous month and marks their 25th straight month of contraction, according to Enterprise Singapore.

The city-state’s overall non-oil domestic exports (NODX) in September, on the other hand, rose by 5.9% year on year on the back of higher shipments of electronic products abroad, growing for the fourth consecutive month.

The NODX growth slowed down from the 7.7% increase recorded in August.

NODX to Singapore's top 10 markets as a whole grew in September 2020, though exports to Hong Kong, Indonesia, Thailand and South Korea declined. 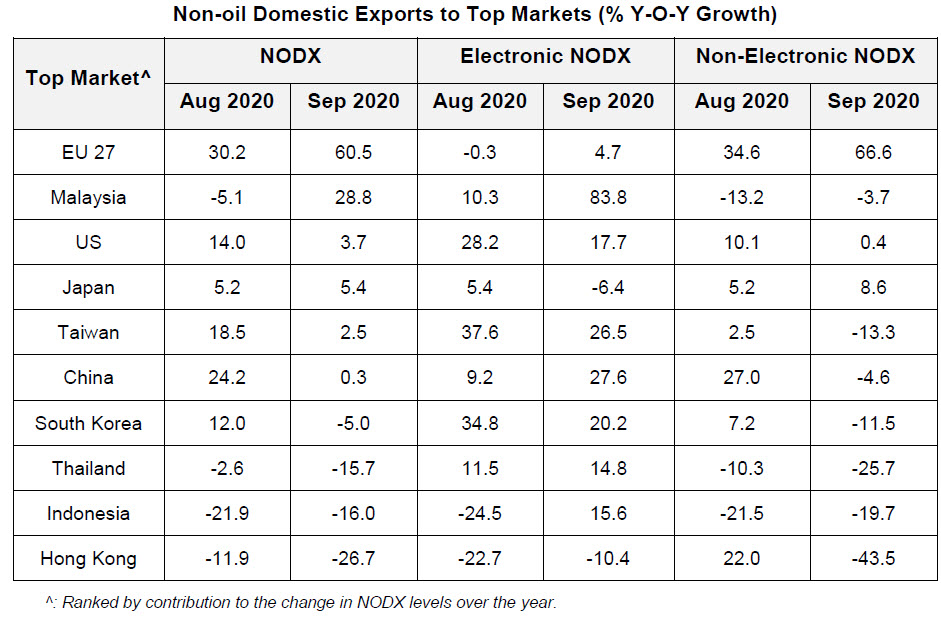 September non-electronic NODX, which includes petrochemicals and pharmaceuticals, rose by 1.8% year on year, a sharp deceleration from the 8.3% expansion recorded in the previous month.

Pharmaceutical exports fell by 27.3% year on year in September, reversing the 5.6% expansion in August.

Singapore expects its full-year NODX to post a 3-5% growth, a reversal of an earlier projection of a 1-4% contraction.

Based on preliminary estimates, the economy continued to contract in the September quarter, but the 7% decline represented a moderation from the 13.3% contraction in the second quarter.

The average GDP contraction in the first three quarters of 2020 stood at 6.9%. For the whole of 2020, the economy is projected to shrink by 5-7%, according to the Ministry of Trade and Industry (MTI).

"The latest GDP data in the third quarter further confirms that Singapore’s economy has been improving since the trough in the second quarter," Singapore-based UOB Group Economics & Markets Research.

"However, the pace of the recovery has been hampered by the continued softness in the construction sector amid a non-existent tourism demand which further dragged the services sector," UOB said.

The construction sector in July-September 2020 shrank 44.7% year on year, "likely given the slow resumption of construction activities amid reports of fresh Covid-19 [coronavirus disease 2019] infections in the foreign worker dormitories", it added.

Singapore has 57,892 coronavirus cases as of 15 October, according to the Ministry of Health.