Petrotahlil -The unceasing rise of polyol prices in the Middle East along with scarce availability of cargoes has dampened demand for toluene diisocyanate (TDI) in the region.

With polyol supply expected to remain tight up to the end of the year, TDI demand is likely to be negatively affected for the foreseeable future.

TDI and polyols (both the POP and the conventional variety) are used in combination to manufacture polyurethane (PU) foams which have multiple applications, including for mattresses, furniture and automobile seat covers.

Due to the months-long rise in prices of upstream propylene oxide (PO) in China, polyol producers have had to increase their quotes. 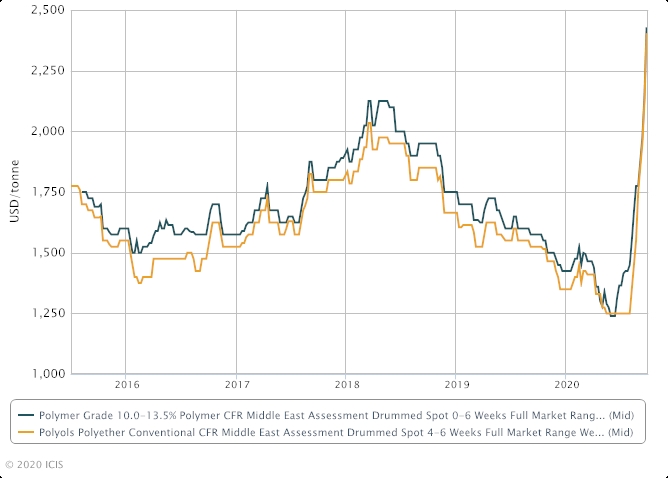 The non-stop rise of upstream PO prices has trimmed the margins of polyol producers. This has made it difficult for them to ramp up production to meet demand, which has picked up markedly since lockdown restrictions were relaxed in the region during the summer.

Polyol supply to the Middle East is currently very limited with many buyers unable to procure cargoes that they need. This extremely tight supply situation has, in turn, caused polyol prices to spike.

Buyers now find themselves in a situation where either the record high polyol prices have made it prohibitively expensive to buy cargoes; or the limited supply makes any procurement difficult.

Since the primary application of both TDI and polyols is in the manufacturing of PU foams, the tight supply conditions prevalent in the polyol market has cooled buying interest in TDI too.

It does not make sense to buy TDI when polyol was not available, a downstream buyer said.

The reluctance to buy new TDI cargoes has also halted the rise of TDI prices in the region, which had been on a continuous upswing since July.

With most market players expecting the polyol market to be marked by tight supply for the remainder of the year, unless TDI prices begin to decline, demand for the product is likely to continue weakening.