Petrotahlil - Asia’s butyl acetate (butac) prices touched a near six-month high, buoyed by supply constraints in China amid plant maintenance, with an expected uptick in demand set to liven up the market.

On a free-on-board (FOB) China basis, spot butac prices as of 11 September stood at $760/tonne, up $10/tonne from a week earlier, and at their highest since 27 March, ICIS data shows.

Spot prices of related product ethyl acetate (etac) rose by a similar magnitude week on week to $722.50/tonne FOB China, levels not seen since mid-March on the back of snug supply in China. Shanghai Huayi Chemical is carrying out scheduled maintenance at its 200,000 tonnes/year plant in Wuwei until late-September.

In South Korea, Korea Alcohol Industrial will conduct a planned turnaround at its etac/butac swing plant in Ulsan from 20 October.

China’s butac exports in July were at 5,712 tonnes, down 30% from the previous corresponding period, according to ICIS Supply & Demand Data. 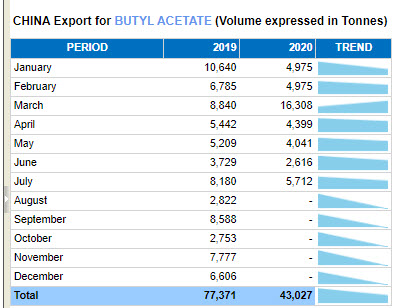 Moreover, a majority of etac plants in China are operating at an average of about 50% of capacity, keeping spot cargo supply in check.

Firmer feedstock prices resulted in higher market discussions. Market sentiment in the near term was relatively optimistic in terms of restocking demand, ahead of the mid-autumn holiday and the week-long National Day celebration, termed as Golden Week, in China from 1 October.

Butac is used as a solvent in paints and coatings.

Ethyl acetate is used in the production of coatings, process solvents including pharmaceuticals, printing inks, adhesives and cosmetics.