Petrotahlil - After several months of very poor demand for butadiene (BD) due to the well-known impacts of the coronavirus pandemic on the key end-user automotive sector, the European BD market has finally started to show some more sustained improvement.

Demand for both domestic and spot export needs has improved considerably since the spring.

Spot export prices more than doubled from early July through to mid-August as Asian buying interest picked up alongside some regional constraints on supply. 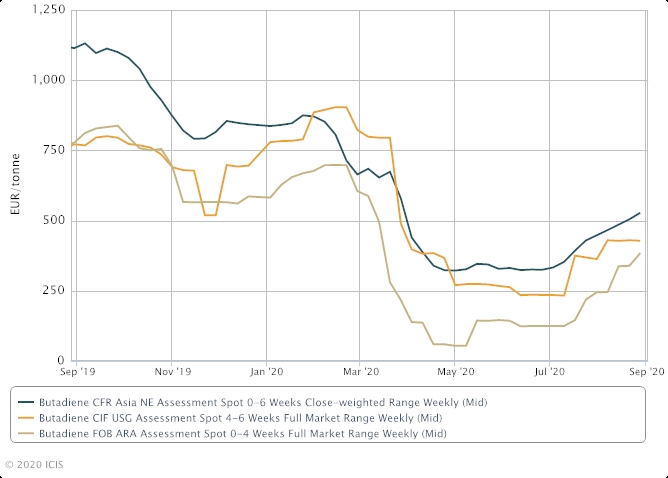 Spot availability in Europe was and continues to be restricted on the back of BD producers’ self-imposed reductions in operating rates at extraction units, and sometimes at crackers if there were no suitable alternatives available for crude C4 BD feedstock processing.

Producers have had to tailor BD supply for some months now to offset the very reduced offtakes domestically as well as to avoid the below-naphtha spot prices that have been prevalent until very recently.

“We were already tailoring supply in April and May, but the drop in demand was simply too big,” a producer said.

The September contract reference price was settled earlier this week and saw a third consecutive increase after the contract market lost more than half of its value - a considerable €395/tonne - in the two months April-May. 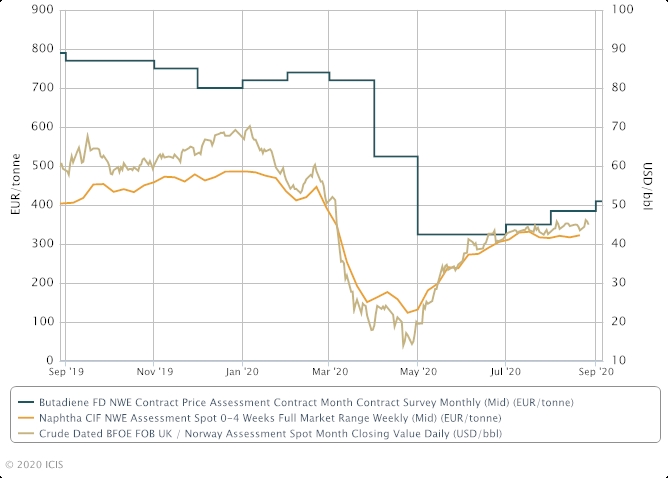 The increases have been moderate throughout, reflecting the extremely cautious mood among most players, but while a step in the right direction, have not been enough to improve on the BD-naphtha spread as producers would like. BD continues to lag behind upstream developments and margins remain sorely squeezed.

“It’s a slow, slow improvement, not what we want but what we expected under current market conditions,” a second producer said, adding that, “the naphtha-BD spread is still a problem.”

Consumers talk of steady improvements in demand - one lifted its force majeure on its offtakes only in August after three months - and agreed that the latest increase was conservative but justified given the uncertainties that cloud the horizon.

“We understand that suppliers are suffering with margins, but they understand we cannot go too far too fast,” a consumer said.

“Buyers have a little bit of an advantage as no one wants to overdo things,” the first producer said.

“Market sentiment is still weak and  [the September CP increase] is in the right direction, but if you see how Asia is developing and the US too... Europe is behind,” it added.

Latest Asian prices have moved into the low to mid $600s/tonne CFR (cost & freight) for October arrivals, while US discussions for September contract prices are suggesting that increases are likely. The August US BD contract reference price settled at $496/tonne – equivalent to about €420/tonne.

One producer said it had already received a lot of requests for October volumes from both domestic players and traders for export and that it expects prices to move up. It did, however, say that November was “a question-mark” in demand terms.

Players are a little concerned about the year end. Inventory controls usually reduce demand, but some players are asking themselves if this will be the case in 2020 given that most have kept a tight rein on stock levels since the start of the pandemic.

"People will worry about the year end which in a normal year is awful, but in a year where everything is different, we can't look for normal," the first producer said.

The producer said it thought that market conditions would be steady and there would be less of an impact than might be seen in a regular year.

The Chinese Lunar New Year will fall on 12 February 2021 and this could support BD operations in Europe in December.

However, this does not take into account new capacities expected to come on stream in China in the second half of the year – about 430,000 tonnes/year is due – with the latest being a 140,000 tonne/year BD unit in Liaoning.

“For December we are very cautious,” a third producer said.