Petrotahlil -Demand and production of polyvinyl chloride (PVC) remains out of balance in the US and Canada, and is muddying market participants' view of the remainder of 2020.

Monthly domestic sales of US and Canada PVC resins climbed enough to put July's figures among the highest of the past five years, trimming exports and reducing inventories, according to preliminary figures released Wednesday by an industry group. 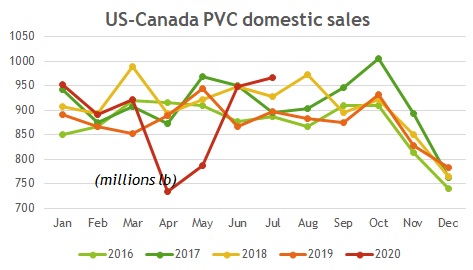 Production held at about average levels, with some producers enduring constrained production, and chlor-alkali production lowered on softening demand for liquid caustic soda, according to the report from the American Chemistry Council, using data compiled by Vault Consulting. 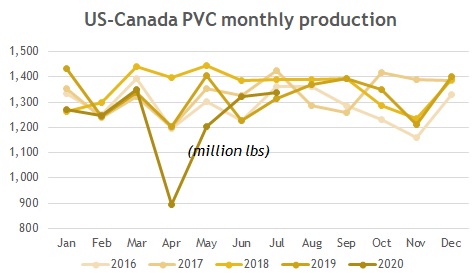 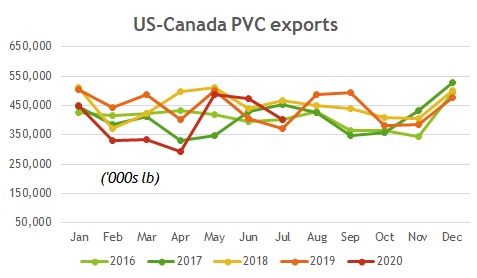 “It’s economic optimism on the reopening of the economy,” a major US producer said of the resurgent domestic demand.

July’s sales outpaced production, reducing inventories to about seven days' worth of sales, the producer said.

Market participants expect that supply will tighten even further between now and the end of the third quarter, before a more regular balance is restored.

Domestic demand into the construction sector has shown strong sales for construction materials made from PVC, including siding, decking and fencing, according to producers and buyers. Some material is on back order, evidence that the demand surge may continue into the fourth quarter.

“They aren’t used to this demand,” said a domestic market participant.

The numbers appear to lend support to separately proposed price increases of 4 cents/lb for August.

The demand surge follows a sharp fall-off in orders in April, as well as weak recovery in May that had boomed in June and July.

Some market participants say that the market is playing catch-up with the weak uptake and production of April and May.

Exports actually began the year at their weakest level in years, but surged in May, as China and other countries in Asia markets emerged from the coronavirus lockdowns that brought business activity largely to a standstill.

US PVC prices for both domestic and exports bottomed out in May, on the weakened demand from the coronavirus shutdowns, and have recovered most of their lost value. 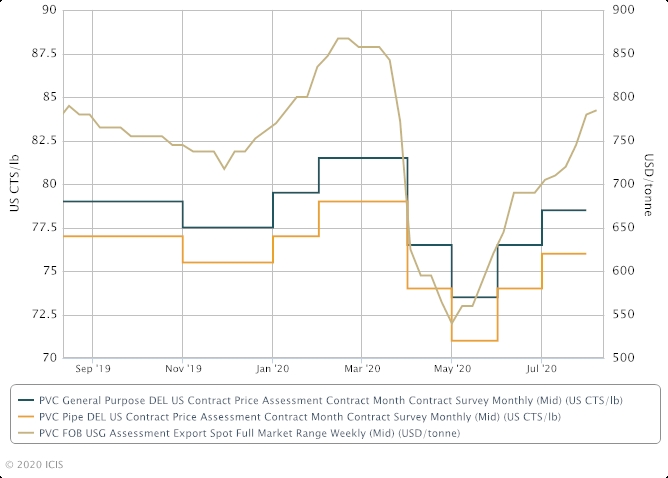 Traders describe a sellers’ market for US PVC, with recovering economies slow to ramp up, but needing raw materials for production.

That has been especially true in Brazil, where constrained chlor-alkali production and a lack of chlorine feedstock for PVC production has drawn US material to Latin America’s largest market. US material is usually blocked from Brazil because of antidumping duties that are used to protect the domestic producers.

Another complication is that during the chlor-alkali process, many US PVC producers make their own chlorine feedstock, along with co-product caustic soda. Slightly more caustic soda is produced, however, and demand for the alkali is described as weak.

Major US producers of PVC include Shintech, Westlake Chemical, Formosa Plastics and OxyVinyls.