Petrotahlil - Aggregate Spanish gas consumption has climbed this month, but an unstable economic recovery could limit any uptick in the longer term.

Hot weather in the coming weeks could help sustain overall Spanish gas consumption, by buoying power-sector gas demand for cooling purposes. But a turn to colder weather, along with the possibility of a second nationwide lockdown and a negative economic outlook, could again cut into consumption in late 2020.

Much of the increase was from the power sector, which could be short-lived. Power-sector gas burn was 390 GWh/d on 1-21 July, well above the three-year average for the full month of 307 GWh/d. It reached as high as 542GWh on 9 July.

Strong electricity demand for cooling purposes has lifted the call on gas-fired units. Temperatures averaged 33°C on 1-21 July in Madrid, Barcelona, Valencia and Seville, above the seasonal norm of 32.3°C. And recent long-term forecasts suggest that above-average temperatures could persist in the coming weeks.

A recovery in weather-adjusted conventional demand may also have further bolstered aggregate consumption.

Conventional demand — comprising residential and industrial consumers — was 564 GWh/d on 1-21 July. This was down from the 595 GWh/d that would be suggested based on the correlation between maximum temperatures and consumption over the period in the previous three years, although the drop was smaller compared with previous months.

Industrial gas burn already climbed in June from earlier in the summer, having hit a nadir in April.

But while Spanish gas demand may seem on track to recover earlier than expected, this could depend on the development of the Covid-19 pandemic in the country.

Fresh outbreaks have already hit several territories only a month after the end of the country's state of emergency, forcing them into new localised lockdowns. Barcelona, a major industrial and economic hub, has been the latest addition to this list. And over 220 fresh outbreaks have been recorded in the country as of today.

Some of Spain's largest gas-intensive industries have continued to be the worst hit by the economic downturn. Spanish goods exports fell by 34.4pc in May from a year earlier, a sharper decline than in the eurozone in aggregate.

This was still 16.4pc higher than in April. But while certain sectors have recorded significant increases, some gas-intensive sectors, including the car manufacturing industry, registered some of the biggest falls.

Spain's Confederation of Employers and Industries (CEOE) agrees that, after a historic fall in activities during the second quarter, the Spanish economy could be showing a slight recovery. But in its latest report, the CEOE also forecast a drop in the country's GDP of over 10pc for 2020. This would be in line with other economic predictions, with the the European Commission predicting a 10.9pc drop, and the Bank of Spain expecting a fall of as much as 15.1pc.

This could suggest that the power sector rather than a solid industrial recovery would have to instigate any uptick in Spanish gas demand over the remainder of the year.

The Covid-19 pandemic drove a 15pc fall in Spain's weather-adjusted conventional demand in April-June, before a recovery this month.

Unadjusted conventional demand — comprising residential and industrial consumers — dropped to 564 GWh/d in April-June from the three-year average of 662 GWh/d.

The industrial sector may have led the drop in conventional demand. Spain applied some of the strictest Covid-19 measures in all of Europe, prompting a halt in production activities during the country's lockdown, which posed a major challenge to businesses.

This resulted in industrial gas burn slumping over the second quarter. 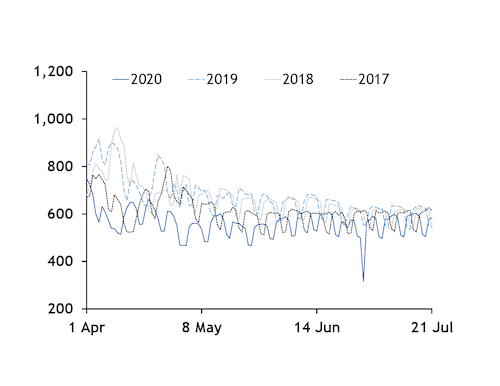 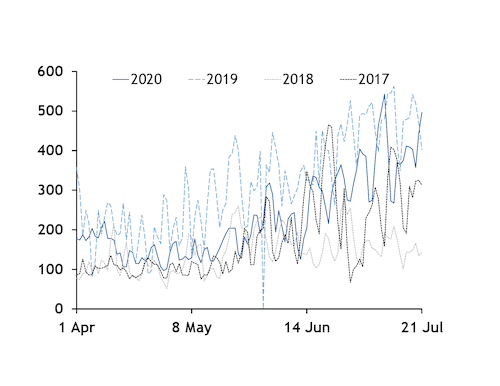 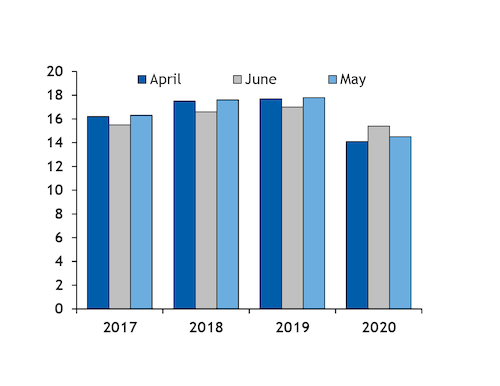