Petrotahlil - Singapore's petrochemical exports fell by 29.1% year on year in June, with overall shipments abroad set to improve in the second half of the year after rebounding last month.

Singapore's non-oil domestic exports (NODX) rose by 16.1% year on year in June, reversing the 4.6% decline in the previous month, according to data from Enterprise Singapore on 17 July.

The uptick in June's NODX is likely due to transient factors such as the low base effect seen in 2009 as well as the the uptick in pharmaceutical demand across Singapore's trade partners, according to analysts.

"Barring an exacerbation of Covid-19 infections across Singapore’s key trading partners, we are now hopeful for a potential positive growth in NODX for the year," UOB Global Economics & Markets Research said in a note on Monday.

Across Singapore’s key trading partners, NODX rose across seven out of 10 destinations. 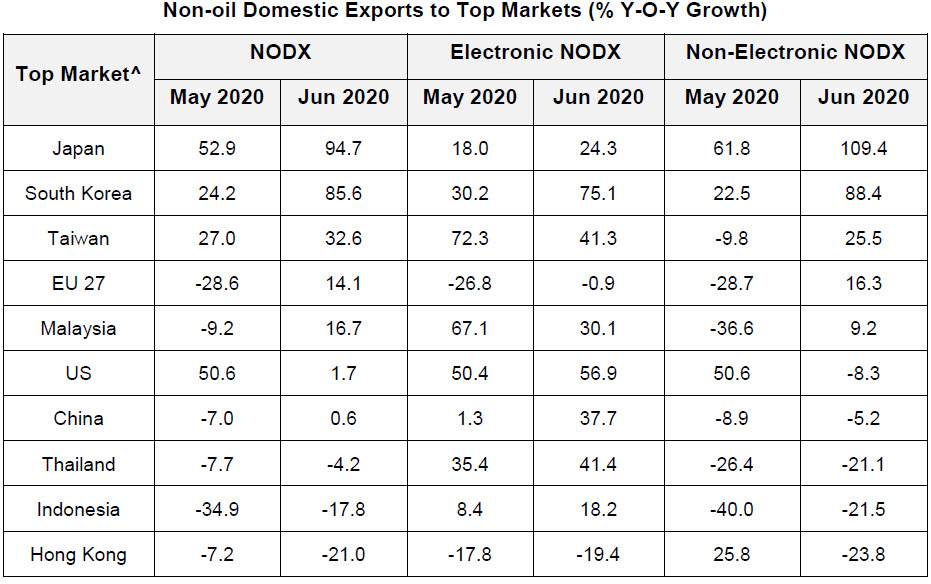 "We expect NODX growth to improve in H2 given some signs that Asia’s exports may have already bottomed out in Q2, although we think the pace of recovery will be gradual," said Japan's Nomura Global Markets Research in a note.

Accounting for the latest data, Singapore's NODX expanded by 6.0% year on year in the first half of 2020.

Non-electronic NODX, which includes chemicals and pharmaceuticals, rose by 14.5% year on year in June, reversing the 9.0% decline in May.

Overall NODX shipments were supported by the 30.8% year-on-year rise in pharmaceutical exports as well as electronics.

"The growth in pharmaceutical exports at 30.0% in the first six months of 2020 has been phenomenal, and further expansions in this area will likely be sustained on the back of a robust international demand for biomedical and pharmaceutical products," UOB said.

Singapore's move to build up its logistics and vaccines development as well as bolster its vaccine manufacturing capacity in the second half of the year could boost biomedical production and export momentum in the near future, it said.

However, the uncertainty surrounding the coronavirus pandemic amid heightened geopolitical tensions will continue to cloud Singapore's trade outlook for the rest of the year, according to analysts.

Singapore's economy is expected to contract by 12.6% year on year in the second quarter of this year, following the 0.3% drop in the first three months of 2020.

Ravi Menon, the managing director of the Monetary Authority of Singapore, recently said in a speech that Singapore’s economic conditions remain weak  and roughly 12% of Singapore’s economy is at the “epicentre” of the impact from the coronavirus pandemic, especially the tourism-related sector.

"Singapore's economy will likely see a sluggish recovery as external demand will likely remain weak due to the Covid-19 pandemic," Japan's Nomura said.