Petrotahlil --The coronavirus has smothered the next wave of new US projects, from ethane extraction all the way down to polyethylene (PE).

On the one hand, US plants have lost much of their feedstock advantage against foreign producers because of the crash in oil prices, said Joseph Chang, global editor of ICIS Chemical Business (ICB). He made his comments during a webinar, part of a series hosted by ICIS.

On the other hand, the coronavirus has slowed down a manufacturing sector that was already struggling.

MANUFACTURING TAKES MORE BLOWS
The following shows regional purchasing managers indices (PMIs), which are a good indicator of the prospects of the manufacturing sector.

The disruptions of the coronavirus caused the already low PMI levels to fall further, Chang said.

The major end markets hit hardest by the disease were automobiles, aerospace, industrial and consumer durables, he said. The declines in these sectors were too steep to be offset by higher demand for food packaging, personal protective equipment (PPE), medical supplies and cleaning chemicals.

While China is recovering, the strength of its resurgence is limited by the weakness of its main foreign markets, which are still recovering from lockdowns, Chang said.

The US and the eurozone are emerging from lockdown in various stages, making the second quarter the most likely low point of the downturn, Chang said. Estimates point to US Q2 GDP declining by 25-45%. US unemployment claims already total 36.5m, more than 10% of the population.

Policy makers and central banks were much quicker to respond than during the previous recession in 2008-2009, Chang said.

In the US, the Federal Reserve introduced unlimited quantitative easing (QE), under which it buys debt. In addition to US Treasurys, it is also buying corporate and municipal bonds, which Chang said is unprecedented.

Thanks to the measures adopted by the Federal Reserve, even companies with below investment-grade credit ratings, such as Tronox can issue debt.

At the same time, governments have passed extraordinary fiscal measures made up of stimulus packages worth hundreds of billions of dollars.

OIL PRICES COLLAPSE
While US chemical companies wait for the economy to recover, they are contending with the collapse in oil prices.

US producers rely predominantly on ethane and other natural gas liquids (NGLs) as feedstocks, while much of the world relies on oil-based naphtha.

The US reliance on ethane means that it enjoys a cost advantage when its feedstock is inexpensive in relation to naphtha.

That was the case for much of the decade, when oil prices exceeded $100/bbl at some points, giving US producers a huge cost advantage.

The result was a chemical renaissance, under which companies announced plans to expand existing crackers and PE plants and to build new ones.

The output for many of these plants were targeted for export markets, making these projects especially reliant on maintaining a cost advantage over foreign competitors.

The first wave of this expansion is largely completed, Chang said. The second one was taking place when oil prices crashed, causing US feedstock costs to converge with those in Europe and Asia.

Once credits are taken into account for co-products, such as aromatics and crude C4s, overall US margins for high-density polyethylene (HDPE) fall below those in Europe and Asia, as shown in the following chart. 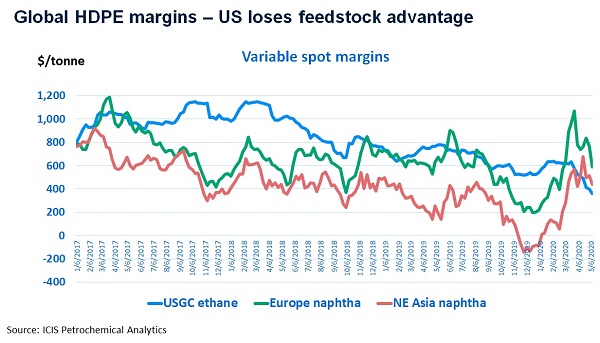 This margin advantage relies heavily on co-product credits, so if the market is weak for one of those co-products, that could limit how much naphtha a plant can crack.

Demand for the co-product butadiene (BD) has been particularly weak, and this has imposed a constraint on naphtha cracking, according to LyondellBasell. Producers are having trouble finding companies willing to buy the material.

THE EXPANSION IS OVER
Given the unfavourable competitive dynamics and the economic outlook, it is going to be hard for companies to make final investment decisions (FIDs) on these projects, Chang said.

There is no firm timeline regarding the FID for the petrochemical project being built in Belmont county, Ohio state, by PTTGC America-Daelim Chemical USA.

The proposed project involves the construction of a 1.5m tonnes/year cracker along with downstream PE units.

Many of other projects were being pursued by oil companies, which were already hurting from the collapse in crude prices.

These companies have responded by making massive cuts in capital expenditures (capex), Chang said. Chemical companies have also cut capex, as shown in the following table. 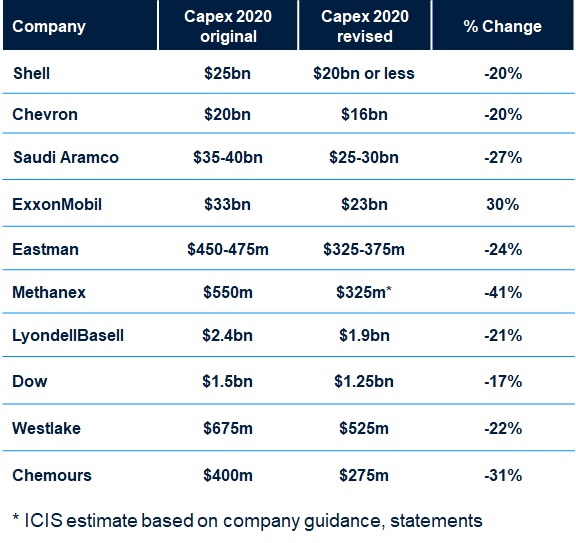 In Canada, Pembina Pipeline is deferring a number of projects, including its investment in the Canada Kuwait Petrochemical Corp (CKPC) petrochemicals joint venture.

Citing the coronavirus, LyondellBasell is slowing down construction at its propylene oxide (PO) and tertiary butyl alcohol (TBA) plant in Channelview, Texas.

Shell blamed the disease for the temporary suspension of construction at its petrochemical complex in Monaca, Pennsylvania.

Even midstream companies are spending less. These companies build the plants and pipelines that extract ethane and other NGLs from production wells and deliver the materials to chemical plants. These cuts could have larger implications in the future by limiting future growth in feedstock supplies.