Petrotahlil - Italy's industrial production index last month fell to the lowest in 42 years because of measures to contain the spread of the coronavirus, preliminary data from employers' association Confindustria show.

Industrial production in March fell by 16.6pc from a month earlier, Confindustria said. Provided the preliminary figures are confirmed by statistics office Istat, this would constitute the largest month-on-month drop since records began in 1960, the association said. And the industrial production index would be the lowest since March 1978, it said.

The effect of the coronavirus pandemic and measures aimed at limiting its spread had been "devastating" for the Italian economy and led to "a double negative shock", Confindustria said. Demand dropped because of reduced consumer spending, the suspension of cultural and commercial activities and the elimination of tourism, while the supply side was affected by the widespread halt of production activities, the association said.

Italy's social distancing measures were intensified significantly over the past month as new infections and fatalities surged.

The government on 22 March approved a decree halting all non-essential industrial activities. The restrictions were initially scheduled to be in place until today, but the decree was extended earlier this week until 13 April.

As a result of the decree, 57pc of all industrial activities were halted, with the remaining segments working at a much slower pace, except for the food and pharmaceutical sectors, Confindustria said.

Italy's gas demand, including from the industrial sector, slumped on the back of the intensified restrictions. Industrial consumption of 36mn m³/d in March was the lowest for the month since at least 2010. And it was just 29.9mn m³/d on 23-31 March after the government's decree on halting production entered into force (see industrial demand graph). Still, demand may have been partly buoyed by continued strong output from the food and pharmaceutical sectors, which are among the most gas-intensive industries. And production in other gas-intensive sectors may also have continued, albeit likely at a slower pace, given that the decree exempts industries where halting production could result in severe damage to plants or a danger of accidents.

The social distancing measures also considerably cut into temperature-adjusted deliveries to local distribution networks — which are largely for space heating — last month as offices, shops, restaurants and institutions such as schools and universities were closed. Deliveries to local distribution networks were 121.4mn m³/d in March. But they would have been much higher, at around 140.5mn m³/d, had the linear correlation between the deliveries and average overnight temperatures in Italy's largest cities — Rome, Milan, Naples and Turin — been in line with earlier in the winter (see LDZ demand and temperatures graph). The temperature-adjusted drop was particularly pronounced late in the month as even stricter social distancing measures were implemented.

Confindustria said that industrial activity could fall by 15pc in the second quarter from earlier in the year, partly depending on when restrictions are lifted and how quickly production can be ramped up again. 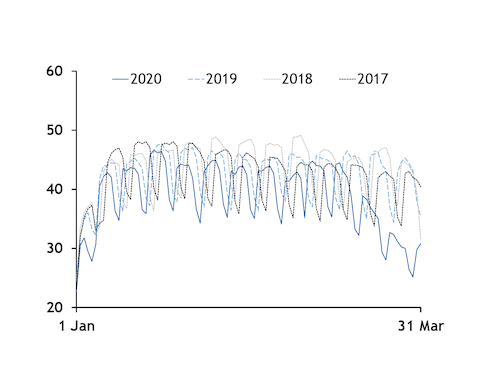 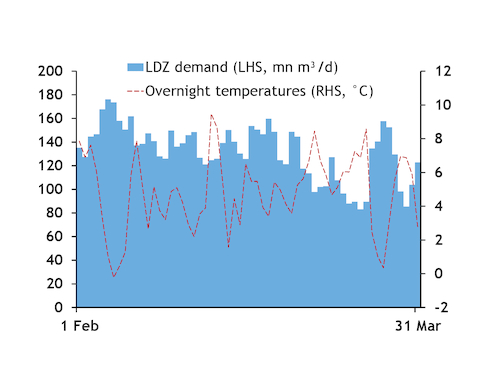