Conditions finally appeared to be improving for the U.S. ethanol sector this February after an extended period of poor margins and weak demand. Several positive headlines in the first half of the month had caused investor sentiment to improve, prompting a rally among the sector's stronger names, Green Plains, Inc. (NASDAQ:GPRE) and REX American Resources (NYSE:REX) (see figure). Even Pacific Ethanol (NASDAQ:PEIX) showed signs of life despite having seen its market cap cut in half over the preceding year. Only The Andersons (NASDAQ:ANDE) continued to struggle, reflecting the perfect storm of low feedstock and fuel prices that has impacted its diversified operations for the last year. 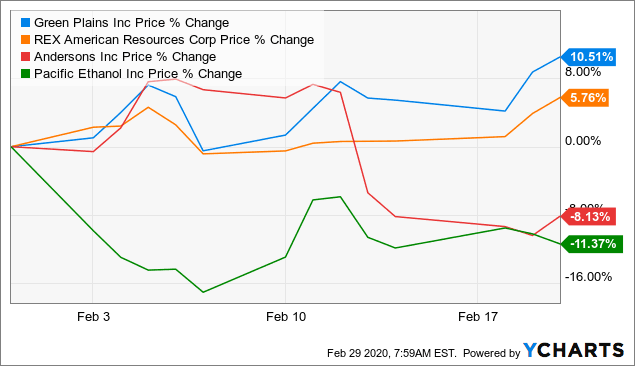 Two major developments encouraged the ethanol sector's beaten-down investors. First, a U.S. appellate court ruled that the U.S. Environmental Protection Agency [EPA] had violated federal law in its expanded allocation of small refinery exemptions [SRE], also known as "hardship waivers", to the refining sector under the U.S. revised Renewable Fuel Standard [RFS2]. The EPA had greatly expanded its allocation of SREs under the Trump administration and weakened regulatory demand for biofuels such as corn ethanol in the process. The court's decision gave rise to the hope that the EPA would respond by limiting its SRE allocations moving forward, which would potentially shore up support for ethanol producers in the process. This hope became reality last week after Bloomberg reported that the EPA intended to scale the allocations back in future years in response to the court decision.

Second, U.S. ethanol exports jumped in December after having trended much lower on a YoY basis through the first 11 months of 2019. While December's 61% QoQ growth was unable to restore 2019's export volume to that of the prior year, it did spark hope in the sector that this strength would continue in 2020. The combination of weakening domestic demand and faltering export volumes in 2019 had explained much of the poor share price performance of U.S. ethanol producers during that year, which is why the market responded positively to the prospect that both conditions were improving.

Last week saw the rally end in a big way as renewed COVID-19 fears gripped the broader markets, and ethanol shares proved to be no port in the storm (see figure). All four independent producers have experienced double-digit losses since February 20, and persistent sector underperformer Pacific Ethanol has shed nearly one quarter of its value in just over a single week. While the downturn can be partially explained by how the virus will affect the world economy - the S&P 500 index also fell by more than 10% over the same period - U.S. ethanol producers are uniquely exposed to the world's reaction to it. 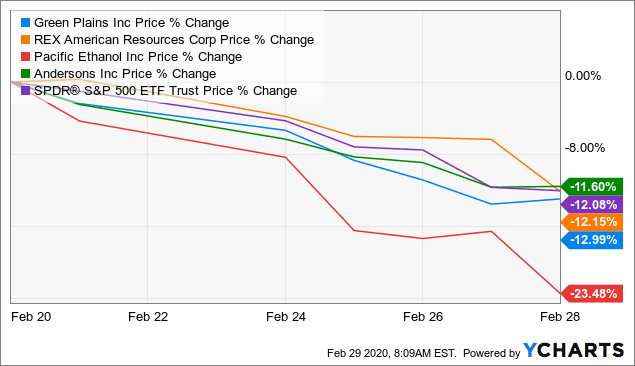 The price of fuel ethanol is primarily driven by the price of the fuel that it displaces, gasoline. Gasoline prices have followed crude prices lower over the last week as energy consumption expectations have declined in response to COVID-19's rapid expansion. The price of gasoline has fallen by substantially more than the cost of ethanol producers' primary input, corn, has over the same period, squeezing ethanol production margins in turn (see figure). Corn prices were approaching decade lows when 2020 began, limiting the commodity's ability to provide relief to the ethanol sector. Ethanol production margins were already at zero even before last week's fuel price decline occurred, making it possible that they have since turned negative for the first time in over a month. 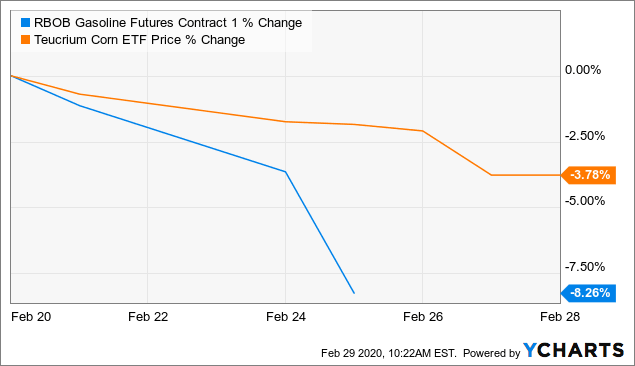 Furthermore, COVID-19 is reducing the probability that December 2019's ethanol export strength will continue in Q1 2020. The International Energy Agency [IEA] stated on February 18 that it expects global petroleum demand to shrink this quarter for the first time since the Great Recession. Last week, the IEA added that even this estimate could be revised lower as the outbreak worsens. The appearance over the weekend of "evidence of community transmission" in the U.S. will only add to expectations of reduced Q1 demand.

The constant drumbeat of bad news has not managed to entirely drown out a recent positive development, however. The Trump administration's decision to scale back the EPA's SRE allocations has caused Renewable Identification Number [RIN] prices to gradually rebound on an expectation of higher future demand. Each RIN corresponds to a gallon of ethanol-equivalent that is produced and blended with refined fuel under the RFS2. Whereas the waiver allocation expansion had caused RIN prices to crash since the waivers reduced demand for RINs and, by extension, biofuels under the mandate, they have rebounded following the Trump administration's legal defeat (see figure). The price of the D6 RINs that cover corn ethanol is about to breach $0.40, a level that was last seen in April 2018. 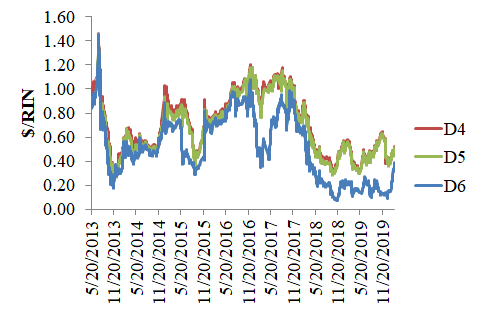 The Trump administration's legal defeat could not have come at a more crucial moment for the U.S. ethanol sector. The resumption of pre-SRE expansion RIN demand levels will also increase demand for biofuels, since RINs are only created when a corresponding gallon of biofuel is produced. COVID-19 makes it less likely that this resumed demand will be met via imports, meaning that the market will turn to domestic producers for the necessary supply. Higher RIN prices should be reflected in higher biofuel prices relative to refined fuels, other things being equal, and this in turn could benefit ethanol producers. It is difficult to say that a higher future ethanol price premium is guaranteed since biomass-based diesel can (and, in the past, has) supply these RINs as well, but the regulatory situation for ethanol producers is certainly better than it was even a month ago.

Investors will therefore want to closely watch the relationship between ethanol producers' share prices and corn ethanol production margins if the broader market continues to decline in response to COVID-19. Unlike other affected sectors such as raw materials, technology, and international transportation, the U.S. government provides a backstop to biofuel demand in the form of the RFS2. This backstop has been strengthened by the end of the EPA's SRE allocation expansion. If ethanol producers' share prices continue to decline but production margins do not, in other words, investors could find themselves being presented with a unique long investment opportunity. The existence of such a situation will need to be confirmed by the presence of a rising ethanol price premium (see figure). This confirmation is not available at present, although that could change if RIN prices remain at or above their current levels as Q1 draws to a close.

Disclosure: I/we have no positions in any stocks mentioned, and no plans to initiate any positions within the next 72 hours. I wrote this article myself, and it expresses my own opinions. I am not receiving compensation for it (other than from Seeking Alpha). I have no business relationship with any company whose stock is mentioned in this article.